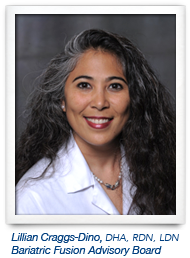 Lillian Craggs-Dino is a nationally and internationally known Registered and Licensed Dietitian with more than 10 years professional experience. She holds a Bachelor of Science degree from Stony Brook University in New York, a Master of Science degree in Dietetics and Nutrition from Florida International University, and a Doctorate in Health Administration from the University of Phoenix. She completed her dissertation research on the subject of interdisciplinary collaboration of bariatric health teams. She is the support group coordinator and bariatric dietitian for a renowned bariatric surgery program in South Florida where she has had much success assisting patients with their nutritional and weight loss goals.

She has received many accolades in her field such as â€œOutstanding Professional Leadershipâ€, â€œOutstanding Scholarship Achievementâ€ and â€œCollegiate Leadership Award.â€ She is an active member of the American Dietetic Association, the Florida Dietetic Association, the Broward County Dietetic Association and she is an Associate member of ASMBS (American Society of Metabolic and Bariatric Surgery). Lillian is presently serving on the Ad Hoc Subcommittee for the Integrated Health Clinical Issues and Guidelines (IHCIG) Committee of ASMBS tasked with revising the current ASMBS Allied Health Nutritional Guidelines for the Surgical Weight Loss Patient. She is a peer reviewer for journals such as Obesity Surgery, SOARDS (Surgery for Obesity and Related Diseases), Bariatric Times, and Todayâ€™s Dietitian. She is a national and international speaker and has authored and co-authored articles on the nutrition management for bariatric patients. Her passion and commitment to bariatric nutrition and patient care is evident, and she is highly respected in her practice. Lillian is a strong advocate for evidence-based bariatric nutrition research and her expertise is sought from physicians, dietitians, and other health care providers.

Read a letter from Lillian

George M. Eid, M.D is the System-Wide Division Director of Minimally Invasive Surgery and System-Wide Division Chief of Bariatric Surgery at the Allegheny Health Network, affiliated with Temple University. Throughout his career, Dr. Eid has authored more than 50 publications and book chapters in the field of Bariatric Surgery and Minimally Invasive Surgery and serves as the principal investigator or co-investigator on many research grants, including NIH and VA merit grants. He has contributed to the training and development of many Bariatric surgeons through fellowship training, didactic and hands-on courses, as well as in his role as a national speaker. Additionally, Dr. Eid, through his position on the advisory board of the VA central office in Washington, DC, has played a pivotal role in the development of public policy within the VA system. Furthermore, he has made numerous contributions to the ASMBS through his role as Chair of the Public Education committee and currently as a Co-Chair of the Emerging Technology committee, as well as through the use of endoscopic techniques in Bariatric Surgery. Dr. Eidâ€™s sincere passions continue to center around patient care and reach, as well as the pursuance of evolvement of emerging, minimally invasive technologies in the fight against obesity. 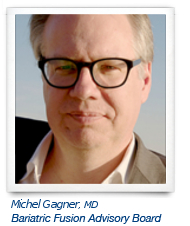 Dr. Michel Gagner obtained his M.D. in 1982, and his surgical training at McGill from 1982-1988 under Lloyd Maclean. Upon completion of his fellowships in HPB surgery (Paris and Lahey Clinic), he was recruited to the U. of Montreal, Hotel-Dieu (1990-1995), and worked at the Cleveland Clinic where he co-founded the MIS Center (1995-1998). He was appointed Professor of Surgery and Director of the MIS Center of Mount Sinai (New York), from 1998 to 2003. He then joined Weill-Cornell (New York) as Professor of Surgery and Chief of Laparoscopic/Bariatric Surgery (2003-2007). He was until recently, Chair of Surgery at Mount Sinai (Miami) and Professor at FlU, and is currently senior consultant at the Hopital du Sacre Coeur in Montreal.

He has over 250 published articles, 40 book chapters, and 6 books on MIS surgery. He has been visiting professor and operated in >60 institutions in 48 countries. He has held positions in more than 35 societies, and has served on the editorial boards of 12 surgical journals.
Dr Gagner also has received honorary memberships and awards and his most recent contributions focus on innovative GI surgery such as bariatric and endoluminal procedures. 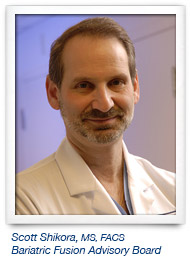 Scott Shikora, MD, FACS is a board certified general surgeon who has been involved in minimally invasive general and bariatric surgery for over 20 years. He attended medical school at Columbia University College of Physicians & Surgeons and completed his surgical residency and Nutrition Support fellowship at New England Deaconess Hospital in Boston. He then spent the next four years as a staff surgeon in the United States Air Force. He is a member of several medical societies and was active in leadership in the American Society for Parenteral and Enteral Nutrition where he is a Past President and former board member and the American Society for Metabolic and Bariatric Surgery where he was both a Past President and a former Executive Council member. Dr. Shikora is an Associate Editor of the surgical journal Surgery for Obesity and Related Diseases and the current Editor-in-Chief of Obesity Surgery. Additionally, he is a reviewer for several other journals. He has co-edited two nutritional textbooks and produced a CD ROM/DVD interactive program on the treatment of obesity, The Multidisciplinary Approach to Bariatric Surgery and Morbid Obesity. Most recently, Dr. Shikora has co-edited and co-produced two web-based, interactive, e-learning programs entitled, Clinicianâ€™s Compendium to Nutrition Support Therapy: A Comprehensive Multimedia Library and The Obesity Compendium. Dr. Shikora has authored numerous book chapters and journal publications and has made hundreds of presentations internationally on bariatric surgery and nutrition support topics. He also developed and directs the Bariatric Summit and World Congress for the Advancement of Surgery, in Israel conferences.

Dr. Shikora worked at Tufts Medical Center in Boston for over 16 years where he was the , and Chief of the divisions of Bariatric and General Surgery. He also was a Professor of Surgery at Tufts University School of Medicine. Currently, he is an Associate Professor of Surgery at Harvard Medical School and the Director of the Center for Metabolic Health and Bariatric Surgery at Brigham and Womenâ€™s Hospital in Boston.

Dr. Shikora has also won numerous awards. In September of 2011, he was awarded the Distinguished Alumni Award from his alma mater, Muhlenberg College. 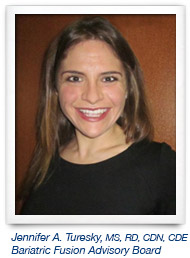 Jennifer Turesky is a Registered Dietitian, Certified Dietitian/Nutritionist, and a Certified Diabetes Educator with 10 years of professional experience. She holds a Bachelor of Science degree and Master of Science degree in Dietetics and Nutrition from Dâ€™Youville College in Buffalo, New York. She is presently working on her certification in Functional Medicine through the Institute of Functional Medicine.

Jennifer is currently the lead bariatric dietitian for one of the premier bariatric surgical centers in the nation. In the past 10 years, she has had much success in supporting patients with their nutrition and weight loss goals pre- and post- surgery. She continues to be an active participant in local bariatric support groups. She has also been an instrumental part of Bariatric Fusionâ€™s research and development team for the past 5 years.